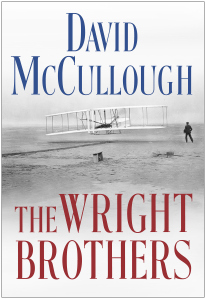 At this stage of my life and career, most of my learning is self-directed. I know that I share this trait with many other middle-aged adults. This understanding has led me to be thinking a lot about the philosophy and practice of self-directed learning lately. It also has caused me to return to  historian David McCullough’s wonderful book, The Wright Brothers (2015).

Before we dive into the main story, let’s start with a definition. In Self-Directed Learning: A Guide for Learners and Teachers (1975), renowned adult education professor Malcolm S. Knowles defines”self-directed learning” as:

…a process in which individuals take the initiative, with or without the help of others, in diagnosing their learning needs, formulating learning goals, identifying human and material resources for learning, choosing and implementing appropriate learning strategies, and evaluating learning outcomes.

That’s as good a definition as any. It covers what a lot of us are doing to enrich our lives and hone new skills.

It also captures what Orville and Wilbur Wright did on their way to Kitty Hawk, North Carolina in 1903, when they invented and flew the first successful airplane.

Going back to my boyhood days, I had long been familiar with the historic narrative of the two brothers who owned a bicycle shop in Dayton, Ohio and used virtually all of their spare time to learn about flying. I figured that I knew what I wanted to know about that story, until I started reading McCullough’s book and became enthralled.

McCullough writes about how Orville and Wilbur were raised in very modest surroundings by a missionary father who strongly believed in the power of reading, how their sister Katharine strongly influenced and supported their work, and how an intense devotion to teaching themselves the science and mechanics of flight led to their success.

The brothers were smart and eager to learn. Wilbur, notably, demonstrated qualities of genius. Their accomplishments were especially remarkable given that, as McCullough states, they had “no college education, no formal technical training, no experience working with anyone other than themselves, no friends in high places, no financial backers, no government subsidies, and little money of their own.”

At the time Orville and Wilbur were reading the existing scientific studies about the prospects of manned flight and conducting experiments with homemade wind tunnels in their bicycle shop, other more prominent, well-funded, and well-credentialed inventors and scientists were also working tirelessly to become the first to achieve motorized flight. But this did not dissuade the two brothers from pursuing their goal, with a giant assist from sister Katharine. In fact, they would largely rewrite the book on the science of flying. and in the process refute previous theories and studies advanced by many “experts” on aviation.

Some passages in this piece are drawn from a 2015 article about David McCullough and the Wright Brothers posted to my professional blog, Minding the Workplace.